Whatsup everyone and happy Hump Day! Ohmygod guys, homegirl just worked up a sweat. I just finished a timed exam that was an hour and a half long in one hour and twenty-eight minutes. I seriously feel like I’m going to have a heart attack!! But luckily that’s all over and now as I kick back with Madonna’s “Like A Virgin” playing on the ol’ iPod I can get my blog on. Today is Woman Crush Wednesday and after completing season three of Orange Is The New Black two days ago I need to give a #WCW shout out to the beautiful Miss Ruby Rose!

Welcome to the world of lifewithlilred, you gorgeous Australian goddess, you. Last time I did a #WCW post on here, it was for my sister…but that post was made out of love and not in the crush way which would be weird considering she’s my sister. However, you are my legitimate woman crush. I described my school girl swooning over you to my friends as “the way I could imagine a teenage boy would feel” and I am not mad about it for a second. You are simply stunning. You have a one million kilowatt smile, perfect skin, the coolest haircut ever, and a rockin bod. Can I get a hubba hubba and an amen? As soon as your character was introduced on #OITNB my heart basically fell into my butt and I couldn’t watch you play Stella without the worst case of puppy dog eyes ever. How you make prison khakis look fabulous is beyond me! You are flawless and I am so happy to present you with Lil Red’s #WCW shout out post! I LOVE YOU!!! ❤ 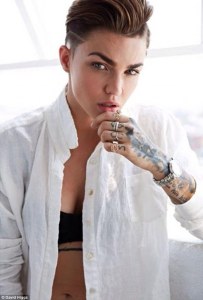 So there you have it everyone, my #WCW for the week! If any of you are in a giving mood and feel like sharing this post, PLEASE DO IT! Maybe, by some mystical power Ruby will see this and then we can meet each other and get married and live happily ever after. It would be a dream come true! :’) I hope all of you are having a great day so far! Who is your Woman Crush Wednesday? How do you feel about season three of #OITNB? (My sister and I both loved it!) I wanna hear from all of you, so leave me a comment and let’s chat! Much love. -Sarah

Whatupppppp everyone and happy Monday! It’s currently one thirty in the AM and I’m not very tired and I promised my sister that I would stop watching the new season of Orange Is The New Black without her, so I figured I would get the Monday Update out of the way now. I hope all of you had a great weekend! I know I did, thanks for asking! As you guys know, I spent my Friday night at the Horseshoe Casino (See article “Casino Adventures”) which was tons of fun – and the good times continued throughout Saturday and Sunday. Saturday was a day of sleeping in, shopping, and date night. Sunday was a day of wonderful company, hair dye, family, and #OITNB. Best. Weekend. Ever!

On Saturday afternoon my mom and I were shopping around in the Fairlawn area and we happened to stumble into Bath & Body Works in the midst of their semi-annual sale. I’ve never been a huge B&BW fan, but holy moley their sale prices were incredible! I got six FULL SIZE (8 oz.) perfumes for the price of one original priced bottle – talk about a deal! As I’ve mentioned before, the only perfume that I wear is Victoria’s Secret’s “Enchanted Apple”, but unfortunately they don’t carry the fragrance year round. The only times they break that scent out is during their semi-annual sales, which is when I stock up on my perfume for the year. About a month ago, I finished my last of five bottles that I purchased during the last VS sale, so I’ve been using the random odds and ends fragrances that my sister and I have…Believe me, I’m not thrilled about it! I feel incomplete without my signature scent. BUT fear not, because I found a very similar apple-y fragrance from B&BW that I’m super obsessed with. B&BW’s “Country Apple” has the exact same sweet/tart fragrance that I love so much in “Enchanted Apple”, so best believe I bought five bottles to keep me going as well as one of their aquatic fragrances “Cool Amazon Rain”. I also stocked up on some dirt cheap lotions which make perfect add ons to birthday and holiday gifts. #BALLIN After shopping with my mama, it was time for date night with my darling, handsome prince Kyle. We went hard on appetizers and yummy drinks at Applebee’s and spent beautiful quality time with each other which was much much needed! Love him! ❤

Yesterday was a pretty chill day which was so nice after being out and about most nights last week. I met up with one of my dear friends, Scott, for some terrific conversation and coffee – which was an absolute joy. He’s definitely on my list of “Lil Red’s Favorite People in The World”! Once I got home in the mid afternoon, my sister and I binge watched #OITNB for a bit and then I got to work on dying my hair. I dye my locks once a month to keep my red fresh and vibrant and let me tell you, it’s a trip washing the dye out of my hair and watching all of the color come out. It straight up looks like the Texas Chainsaw Massacre happened in my shower every time. The rest of my evening was spent plucking my eyebrows to perfection (ayy!), annihilating at Scrabble, watching #OITNB once again, and here I am now getting my blog on!

So now that you guys know what my weekend was looking like, let me tell you all about how freaking excited I am for tonight! I’m going to see Glass Animals at the House Of Blues in Cleveland with one of my comrades and I’m seriously so pumped I could cry!!! I really lucked out when I found out that Glass Animals was playing in Cleveland last Thursday because if it wasn’t for Facebook I would have had no idea. While scrolling through my news feed on FB I happened to see a status from HOB advertising for the chance to win tickets to the show on Monday night. It was weird that it showed up on my news feed because I have yet to “like” HOB or Glass Animals on there, so there was no reason for it to show up – but I’m so beyond glad that it did! As soon as I saw that they were playing I bought tickets ASAP because there’s no way in hell that I would pass up seeing these guys live. I’ve been in love with Glass Animals since last September and I’ve told literally everyone who I’ve introduced their music to how much I would love to see them live. I can’t believe that in less than twenty-four hours I’ll be hanging out at the House Of Blues watching one of my favorite bands perform! AHHHH! June will definitely be a good month for concerts, because I’ll be back at HOB on the 30th to see one of my other favorites, AWOLNATION, compliments of my brother for my birthday. What a guy! I’m also pretty hyped because Family Of The Year is opening for them and I happen to really like them too! Exciting stuff!!

^^^ SO GOOD! Also, if you’re interested in shopping the semi-annual sale at Bath & Body Works, their offers are available online as well at: http://www.bathandbodyworks.com/home/index.jsp! Happy shopping!

So there you have it, my Monday Update: Alright, Alright, Alright Edition! #MCCONAUGHEY!!!! Make sure you check back in with me at some point during the week to hear all about my Glass Animals concert experience! Is anyone going to any concerts coming up? What about any of the festivals like Lollapalooza, Bonnaroo, or the Hangout Fest? I wanna hear from all of you, so leave me a comment and let’s chat! Have a lovely day! -Sarah