Howdy everyone and happy Monday! I hope all of you had a fabulous weekend! I’ve needed to go to the eye doctor for quite some time now and finally managed to get an appointment this past Friday. After I got a new prescription for my contacts, I spent some time looking for new glasses because I’ve seriously had the same pair since I was fifteen. I found a few pairs that really spoke to me so I went home and then returned later in the day with my mom to get her opinion.

I tried on tons of different frames but I ended up returning to the two pairs that I was daydreaming about all afternoon. Two remarkably different but amazingly cute frames. A pair of red, black, and white Kliik Denmarks and a circular black and grey pair of Dolce & Gabbanas. My mom and I were really struggling to figure out which pair was the one and began to grow increasingly aware of the time crunch that we were working with as the office was closing soon.

Lucky for me, I was allowed to take both frames home for the weekend so that I could decide which one I like the best. All weekend I’ve been flip flopping between the two quirky cool pairs and I think I’ve made a decision…But I want to hear what the general public thinks, first. I’m so aware that the following selfies kind of suck but they get the job done. So take a look and then help me decide which pair I should go with: 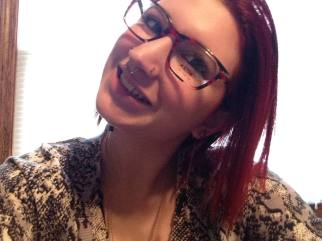 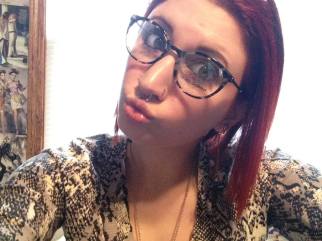 So there you have it, this week’s Monday Update: This Or That Edition! What pair of glasses do you like the best? Has anyone struggled with a glasses situation similar to mine? I want to hear from all of you, so leave me a comment and let’s chat! Much love. -Sarah