The elderly population of America is growing these days. The Population Reference Bureau (PRB) report entitled “Aging in the United States” revealed that the number of Americans aged 65 and above will more than double from 46 million today to over 98 million by 2060. The group’s share of the country’s total population will rise to nearly 24 percent. Which means, it’s time everyone learns how to talk better to the elderly, particularly to their aging loved ones.

In an article, The Chicago Tribune talked about the proliferation of “elderspeak,” defined as a specialized type of speech younger adults use to communicate easily with their elders. According to the writer, Cindy Dampier, describes it as a “sugary tone” that mimics how people talk to pets or small children. It might seem like a harmless form of personal communication. After all, you’re trying to help aging loved ones by adjusting to their communication levels. On the contrary, it’s not always a good idea.

If you’re trying to open a conversation about Wichita hospice care or other important matters, refrain from talking to them in elderspeak. Keep in mind that the person you’re talking to is an adult who has more experience in life. They’ve raised kids, served their country, directed board meetings, and more. They are still adults who deserve to be treated (and talked to) like adults.

Words Can Have Consequences:

The popular children’s rhyme “Sticks and stones may break my bones, but words will never hurt me” is untrue, especially with older adults (particularly those who are emotionally sensitive). A number of researches reveal that elderspeak can affect an elder’s mental and emotional welfare.

A study from the Yale School of Public Health reported that elders who experienced negative stereotypes associated with aging were more likely to have balance and memory problems. While the researchers didn’t study elderspeak in particular, the participants of the study encountered condescending communication styles from family, doctors, nurses, and other people in the community.

Kristin Willams, RN, Ph.D., of the University of Kansas also conducted a study on the effect of elderspeak on an elder’s health. She reported that aging individuals with Alzheimer’s disease became more resistant to care when people use elderspeak around them. 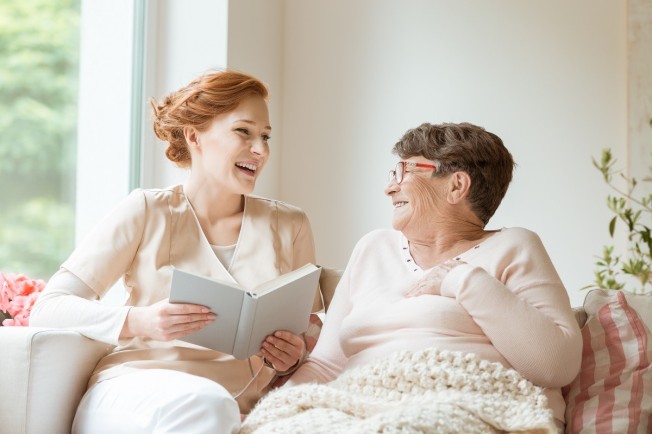 There’s a Better Way to Talk:

Communication with aging loved ones can be challenging, especially if they are experiencing physical and mental problems. Still, there are better ways to talk without switching to baby talk for adults. First, be mindful of your tendency to speak down to elders and make a conscious effort to use a tone and words that echo dignity and encouragement.

Second, speak calmly and clearly without raising your voice. Always use a gentle and relaxed tone but talk at a slightly slower pace so that your loved one will understand you. Finally, exercise patience. It’s easier said than done because how the elderly respond to you is out of your control. How you respond to them, however, is in your hands.

There are always better ways to talk to your elderly loved ones. Instead of getting frustrated or subjecting them to elderspeak, a good rule of thumb is to interact with them in a way you would want them to treat you if the tables were turned.