Hey everyone and happy Saturday! So I had the most fabulous date night on Thursday with my sister, Kristen, and my beloved nail tech, Vinny, that I want to tell you guys all about! This little outing was in honor of my 21st birthday, compliments of Vinny and it was seriously one of the best nights of my life! Let’s discuss! 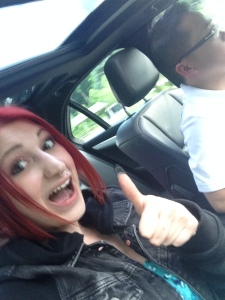 Our night on the town began with dinner and wine at Bricco, a super delicious restaurant that Kristen and I live down the street from. The menu there is terrific because it’s predominantly vegetarian, so both my sister and I had a lot of options to pick from. All of our meals were great and we each picked out a bottle of wine as our beverage, haha AYYY! We drank and ate until we couldn’t move and then we headed off to the Hard Rock Rocksino for some more birthday tom foolery. The Rocksino was so cool and was much nicer than the Horseshoe Casino, which I went to last week. It was bright and upbeat and had the best decorations ever – the instruments and outfits used and worn by different musicians. All of this amazing memorabilia is compliments of the Rock n’ Roll Hall of Fame in Cleveland. Every area of the casino had different costumes on display from everyone like Nicki Minaj to Elvis Presley…so, so cool! We headed to the bar for drinks once we got to the Rocksino and after we all got what we wanted Vinny and I went to explore the premises and play some games while Kristen met up with a few of her friends at the bar. There was so much to look at as Vinny and I strolled around and I would have been happy just wandering aimlessly throughout the casino, but we happened to see a game that we just had to play. Want to know why? Take a wild guess. Okay, here we go….The name of the game was LIL RED!!!!!!!! So yes, taking a chance on the Lil Red game was absolutely necessary! Haha, take a look:

^^^ Lol AHHHHH!!!! Unfortunately, we didn’t have too much luck on Lil Red but I had a moral obligation to play it so I’m the farthest thing from mad about it! After Vinny and I roamed the casino for a little while longer we rejoined Kristen and her friends for more booze and to watch the band that was playing in the restaurant area of the Rocksino. Whomever was playing was a cover band who played renditions of current radio hits and old tried and true favorites…They sounded pretty good to me, but then again, I was very drunk. All of us continued to drink and enjoy the band and thanks to the bar at the Rocksino, I was able to try my very first mojito, pina colada, and apple martini and they were all delightful! All alcohol usually is! 😉 #whitegirlwasted

We finished up our time at the Rocksino with one more shot at the bar and then went on our merry way. My birthday date night was a huge success and I had an insanely good time! I didn’t think that I would end up at a casino again after my trip to the Horseshoe last week but I had a much better experience at the Rocksino. It was such a fun environment to be in and the best part about it was that the music that was playing in the casino wasn’t overwhelmingly loud! That was my major complaint about the Horseshoe, along with their dingy lighting and the Rocksino had both of these issues on lock with a perfect music volume and lighting scheme. I would definitely go there again, not necessarily to gamble, but to get drinks and to watch whatever entertainment that they have scheduled for the night. So if you’re ever in the Northfield, Ohio area, definitely check out the Hard Rock Rocksino…maybe you’ll see me there!

^^^ I didn’t take many pictures of the costumes that they had on display at the Rocksino but here’s a PicStitch of what I did snap!

Words can’t express how grateful I am to Kristen and my sweet Vinny for an awesome post birthday celebration. I seriously have the best friends in the entire world and I have no idea what I would do without them! Saying that I love my Vinny and Kristen is a severe understatement, but it’s the best that I’ve got to describe how I feel about them! #bestfriends #teamvinny

I hope that all of you are having a great weekend so far! I know I am! What is everyone up to tonight? Any fun plans? I wanna hear from all of you, so leave me a comment and let’s chat! Much love. -Sarah

Heyyy everyone and happy weekend! I’ve been having the best outings this week following the travesty that was my birthday and last night was no exception! As a birthday treat to me, my lovely and astoundingly pretty friend Danielle took me to the Horseshoe Casino in downtown Cleveland. It was….quite an experience. Don’t get me wrong, I had the best time hanging out with Danielle and I loved her company, but I don’t think her or myself will be hanging out in a casino again any time soon! The casino in general was just very very overwhelming. It was seriously gigantic – every time we were walking around I felt like we were in an area that we hadn’t been in before, but in all reality we walked past it countless times. It was so hard differentiating all of the different casino corridors because they all looked exactly alike. It felt like every time we walked away from something and eventually came back to it the initial area changed into something completely different, if that makes sense? It was seriously the strangest sensation I’ve experienced in ages. It felt like the casino was shifting and redecorating with every step we took like a giant labyrinth. So on top of being in this enchanted casino it was fairly crowded and the music that was playing was loud so it was total sensory overload. And don’t even get me started on the games! Danielle and I stuck to the “easy” games like the fruit slot machines and whatnot, but unfortunately, we both weren’t very lucky. It was so frustrating, because even if we won something in the game it still didn’t make up for what we initially spent to begin with so we were losing money. Danielle was so sweet because before we got into the casino she had me pull a piece of paper from her beanie and on the paper was the amount of money that she would supply for the games and after we reached that limit we were donezo. It was such a generous thing to do which I was so blown away by and it was also a really great idea to give ourselves a spending limit. Like I said earlier, we weren’t very lucky at the games and our limit was well spent after barely over an hour…But in that hour I can totally see why gambling addiction is a thing. Danielle and I experienced that “just one more try” mentality first hand and it was quite off putting. Like, we knew we were losing money but we were both so convinced that just one more spin on the game would result in some winnings no matter how small. The Horseshoe was the only casino myself or Danielle has ever been in, but I’m assuming they’re all set up very similarly – multiple bars, loud music, and dim lighting. All of these different elements really do make up the perfect concoction of a place where you could lose track of yourself very easily. That “club” like environment seemed to hook everyone in the casino because every time Danielle and I walked around all we saw were blank faces in front of the machines and people absentmindedly placing their bets no matter what the cost. That type of thing is obviously what some people like, but it clearly wasn’t mine or Danielle’s cup of tea. On our way home from Cleveland we talked about how we were glad that we got the casino experience out of our systems to at least say that we did it, but we both agreed that it will be a long time before we step foot in one again. Despite our bad luck at literally every game we attempted, it was still a super fun evening and I’m so glad I got to share in a casino adventure with Danielle! 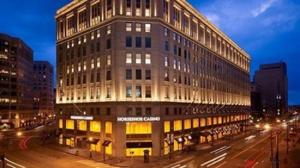 ^^^ Lol both of these songs seemed very appropriate to include in a post about casinos! I’M SO CLEVER! 😉

So there you have it, my Friday night Casino Adventure! I hope all of you are having an awesome weekend so far, I know I am! Have any of you ever got your gamble on in a casino? What was the most that you lost or won? I wanna hear from all of you, so leave me a comment and let’s chat! Much love. -Sarah

PS: If gambling addiction is something that you or a loved one struggle with, I urge you to seek help – whether that be confiding in a counselor, friend, or even a complete stranger. There are multiple different helplines that you can call as well, one of them being the hotline through the National Council on Problem Gambling. Here’s their website: http://www.ncpgambling.org/help-treatment/national-helpline-1-800-522-4700/