Hi everyone and welcome to a new edition of Lil Red’s Book Club! Today, without giving any spoilers away, we are going to be talking about the super popular The Midnight Library by Matt Haig. A month or so ago, I felt like I was constantly getting recommendations to read this book and, obviously, I caved since we are discussing it now! Multiple people told me it was “one of the best books” they have ever read and I was definitely interested in seeing if it lived up to the hype.

While I can certainly understand why people really enjoyed this book, I didn’t think it was the best thing I have read by any means. I was into it for the first two hundred pages or so but it dragged out quite a bit and I was ready for it to be over. Let’s discuss further but before doing so I will put a trigger warning in place as The Midnight Library deals with suicide. 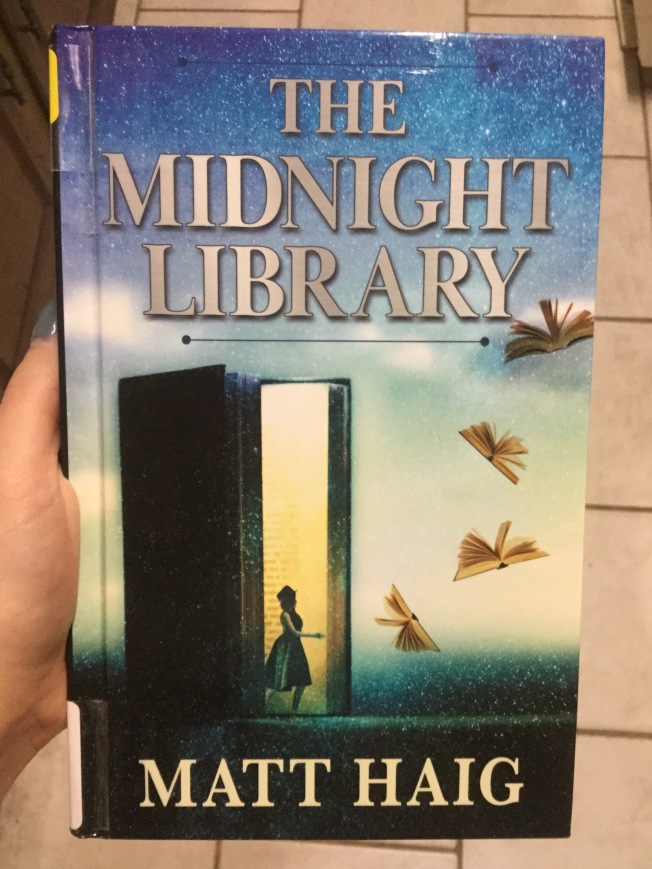 Nora has had a bad day and, according to her, an all around bad life filled with regrets and what ifs. She had the potential to be an Olympic athlete or a rock star but now she lives alone in a shabby apartment and just got fired from her job at a music shop. Broken family relationships and friendships leave her feeling even more alone and her cat died. Her life feels unaccomplished and meaningless and she wants it to end. So she takes an overdose.

But, just when Nora thinks her life is over, she wakes up in a library that is filled with an infinite number of books and is overseen by the librarian at Nora’s high school twenty years ago, Mrs. Elm. This place is called The Midnight Library and it is where people who are hovering between life and death might find themselves. It looks different to everyone but the idea is the same: You can try out any kind of life you would like and if you find one that makes you especially happy, you can stay there.

Before Nora gets to take a different life for a test spin, she must face her own personal Book Of Regrets. As you can guess, its pages are filled with all of the things Nora wanted to do but didn’t. By confronting these regrets, she is able to narrow down the lives she might like to try, like if she really did become an Olympian or a glaciologist. However, despite all of these different lives, Nora always ends up back in the library because something about it didn’t make her completely happy.

Nora can’t stay in The Midnight Library forever and she is quickly running out of time but none of the lives have fully restored her will to live. She is in a place where people are either born or die so what will she end up choosing? Read The Midnight Library to find out!

Now, let me start off by saying that I absolutely LOVED the idea of The Midnight Library and the possibility to live a multitude of different choices, careers, and lifestyles all around the world. I also deeply appreciated the resounding theme of the book that true happiness can be found within yourself and your perspective. Happiness doesn’t come from what you did or failed to do but how you are best living in this one moment because each one opens up a new universe. Like Nora, I struggle with mental health issues and and this was a powerful and inspiring message to me.

Overall, I liked The Midnight Library a lot but it lost a lot of its initial momentum at the halfway mark. The first few times Nora was transported to a new life it was exciting but then there was another, and another, and another… And it just felt like it was never going to end. There was so much build up for an ending that was very easy to be predicted and all of the extra life hopping and parallel universe theories seemed unnecessary and, frankly, it got to be a little boring.

Despite being too drawn out for my taste, this book kind of had a Mitch Albom The Five People You Meet In Heaven vibe and it was a good read. It wasn’t the best thing I’ve read recently but it wasn’t the worst, either. I am going to rate it with a seven out of ten stars. I enjoyed the story line and the hopeful message. It is also a great reminder to always be kind because you never know what someone is going through. I recommend giving it a read!

What are you currently reading? What did you think about The Midnight Library? I want to hear from all of you, so leave me a comment and let’s chat! Much love. -Sarah