Heyyy everyone! I hope you’re all having a fabulous Sunday! So as you know, last night I went to see The Used in Cleveland with my sister Kristen and it was absolutely AMAZING!!!! I got Kristen the tickets for her 23rd birthday in April and we had the best time ever!!! I’ll start off the post with some pictures from the show, and then I’ll discuss our incredible concert experience! 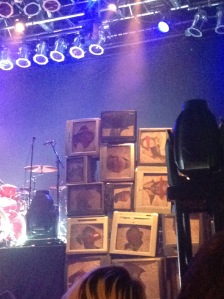 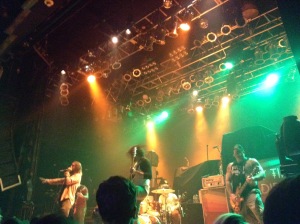 ^^^ Note that the last picture posted is of Every Time I Die who opened the show!

All of yesterday I was seriously so excited I could barely concentrate. Kristen got home from work around 4:30 and we arrived in Cleveland about an hour later. We found a parking garage and then went to wait in the line to get into the House of Blues because the doors opened at six for the show to start at seven. The House of Blues is a pretty intimate venue, and as you can tell by the pictures, Kristen and I were very close to the stage – which was awesome! We had a great view of the entire show, and I couldn’t have been happier about it. It was so cool to feel like you could literally reach out and touch the band members and it was amazing to see all of their expressions and instrument playing so clearly. I wore my concert going Vera Wang wedges so that I wouldn’t have to worry about not seeing anything because I’m a shorty. Kristen opted for more sensible (and still cute!) black tennies, so she stood in front of me so we could both have a clear line of vision to the stage. It worked out perfectly, and sucks to suck for anyone standing behind my fake-tall self thanks to my wedges! There were three opening bands before The Used went on, and quite frankly the first two sucked ass. I honestly don’t even remember the names of the bands and I really don’t care. But Every Time I Die who was on before The Used fucking killed it! I’ve heard of them before, but I’ve never heard their music so I was very excited to finally experience it. And what better way to hear the band for the first time than seeing them live?! They blew their performance out of the water. Every Time I Die definitely falls under the screamo category of music, which I happen to really like! As soon as the band ran on stage things started getting rowdy in the audience, but all of the pushing and shoving just added to the experience. I’ve never been to a show that would fall into the emo or punk genre so it was way fun being able to head bang and jump around with all of the concert goers. I definitely plan on listening to Every Time I Die again, and if you haven’t heard of them I highly recommend you check them out!!! After another twenty minutes, The Used finally came on and Kristen and I were freaking out! The moment that we were waiting for for the past four or so hours was finally here and we were so happy!!! I’ll never forget watching Kristen sing along with so much enthusiasm and I cherish the times when she would squeeze my hand with excitement. I loved watching her have a good time – especially since it was her birthday celebration! Their set list for the night was filled with old favorites like The Taste Of Ink, I Caught Fire, Take It Away, and All That I’ve Got just to name a few. I have no shame in admitting that I totally cried during The Taste Of Ink…I seriously couldn’t help it. I’ve listened to that song on repeat countless times during a bad day and to hear it live was so special to me. It was so much fun to listen to Burt talk throughout the show as well! First of all, he’s drop dead gorgeous. Second of all, he’s hilarious! Our favorite Burt-ism of the night was when he was introducing Pretty Handsome Awkward by saying “this is a song about how fucking special I think I am”. We were dying!! We both purchased the same shirt after the show, which I wanted to buy for her but she wouldn’t let me! The shirt is dope! It’s black with The Used in red and in white there’s a picture of a coffin with a broken up skeleton on the inside and underneath that it says “I Buried Myself Alive”. Love it. We both are wearing it today and it’s the first time we’ve matched clothing since we were little kids! Saying that Kristen and I had a blast is a severe understatement and I’m sure she’ll agree with me when I say that it was the best night we’ve had in ages. My sister’s birthday celebration was a success and I’m so happy that she enjoyed herself. One of my favorite parts of the night was her thanking me and telling me that she had fun – I felt like such a champ and a ballin little sister! ❤

So there you have it! Mine and Kristen’s fabulous experience of seeing The Used in concert! What was the best show that you’ve ever been to? What band would you love to see live? I want to hear from all of you, so leave me a comment and let’s chat! Much love. -Sarah