Hello everyone and welcome to a new edition of Lil Red’s Book Club! Without giving any spoilers away, we are going to be discussing the sequel to Flowers Over The Inferno by Ilaria Tuti called The Sleeping Nymph. Ever since finishing Flowers Over The Inferno in August, I was eagerly awaiting to get my hands on the sequel to see what happens next to Italian police superintendent, Teresa Battaglia, and her team. Despite The Sleeping Nymph not being as good as its predecessor, I still enjoyed it well enough so let’s get to the review: 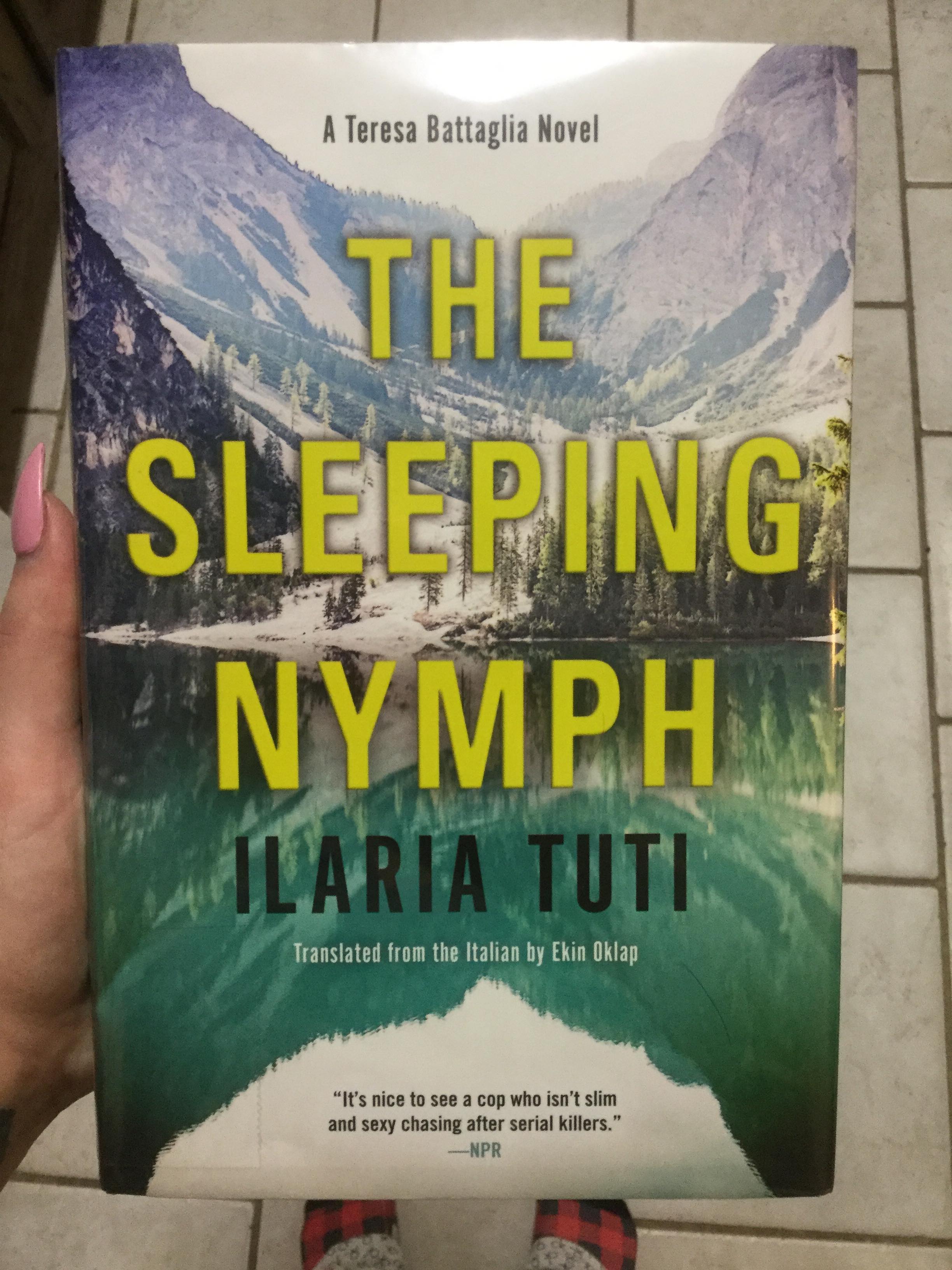 In Flowers Over The Inferno, we learned that aging Teresa Battaglia has began suffering from the early stages of Alzheimer’s and the disease has done nothing but progress. Teresa wears a bracelet reminding her of her name, religiously writes notes in her diary so she doesn’t forget, and has a hard time recognizing people as well as coming up with the names of common objects. Somehow, she still manages to get up every day to help crack cases that are twisted, dark, and to some “unsolvable”. And, in the case of The Sleeping Nymph, Teresa is going to need all of her wits about her more so than ever before.

Our story begins with the discovery of a “missing” portrait in an art gallery painted by Alessio Andrian seventy years ago. The painting it called The Sleeping Nymph and it showcases the great beauty of a young woman – enchanting all who merely glimpse at it. Despite the portrait being so beautiful, it holds a dark secret because, upon testing the red paint that was used, we learn that it is actually blood. What’s more, the tests showed traces of cardiac tissue, meaning it came straight from the heart.

Since painting The Sleeping Nymph, Alessio Andrian never spoke a single word again. He is still alive but, clearly, will be of no help to the case so it is up to Teresa and her partner, Massimo Marini, to find out about the origins of the painting on their own. Through their diligent work, they wind up in the Resian Valley where The Sleeping Nymph originated. However, they get a lot more than they bargained for in the Valley when a human heart is found nailed to a tree, thus fast forwarding their case into the present.

Could the killer of the Nymph still be alive and has come back to tie up loose ends? Or is there foul play going on in the Valley? There is even an inkling that these murders might be tied to occult practices. Who murdered The Sleeping Nymph and who is killing now? Read the book to find out!

Now, I didn’t love The Sleeping Nymph but I also didn’t hate it, either. Despite the portrait painted in blood being an “oh my gosh” discovery, it also happened seventy years ago making the immediate sense of urgency you feel about the present day crimes in Flowers Over The Inferno nonexistent. The Sleeping Nymph kind of dragged on while the focus was in the past but promptly picked up about halfway through when they discovered the heart on the tree in modern time.

My other qualm with this book is just how wordy it is. Flowers Over The Inferno was like that too but I suppose I didn’t notice because it was one of my favorite books that I’ve read this year. Because The Sleeping Nymph didn’t immediately captivate me, the vivid and highly detailed descriptions came off as boring and I felt ready for the book to be done about fifty pages in. I have never not finished a book that I started, though, and the four hundred and forty page read felt more like a chore than something I really wanted to do.

The Teresa Battaglia novels are meant to be a trilogy and my only hope is that the third book will be better than the second. I genuinely have no idea how Teresa will be able to solve another case with the progression of her Alzheimer’s but I am very ready to find out!

Overall, I am going to rate The Sleeping Nymph with six out of ten stars. I think it paled in comparison to Flowers Over The Inferno but I still enjoyed portions of the story line as well as the grand reveal. I would still recommend reading the Teresa Battaglia novels and I can’t wait to see how the trilogy ends.

What is the last book that you read? What do you recommend for me to read next? I want to hear from all of you, so leave me a comment and let’s chat! Much love. -Sarah

Hi! I have always loved to read and once I start a book that I enjoy, I find it absolutely impossible to put it down. Because I have not been “going out” to protect myself and my high risk clients from COVID, I have had ample free time to read and have been finishing books left and right. The most recent? Probably one of the most interesting, disturbing books I’ve read in ages: Flowers Over The Inferno by Ilaria Tuti and translated from the Italian by Ekin Oklap.

Before we begin discussing Flowers Over The Inferno without any spoilers, it is important that a trigger warning be put in place. This book is centered around the hunt for a serial killer who attacks with twisted savagery. There is also human experimentation in this book and, if you read the Author’s Note at the end, you will find that what she spoke of was an actual experiment performed in 1945.

Now, if I haven’t scared you off yet, let’s get into it: 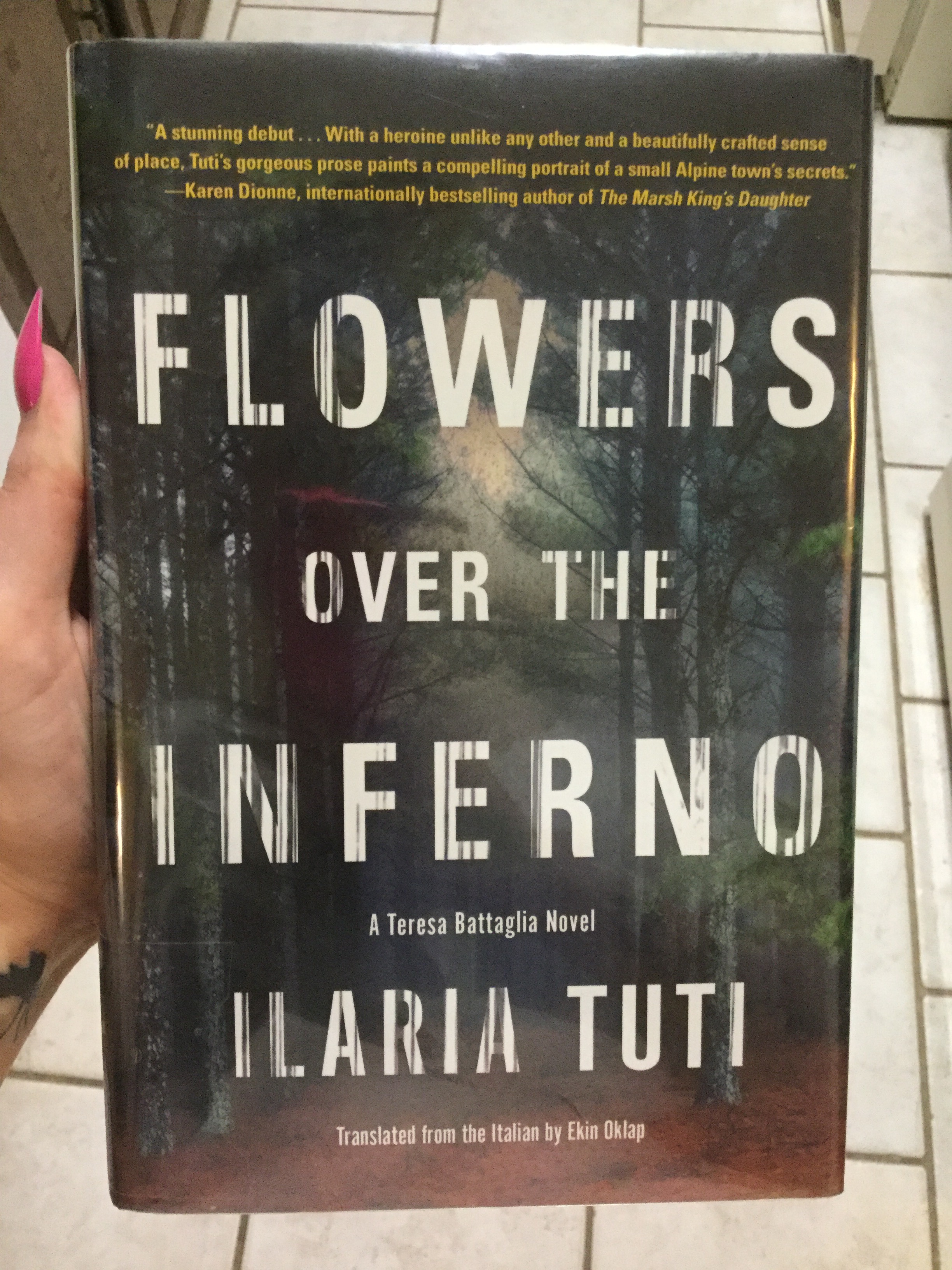 Flowers Over The Inferno takes place in the picaresque village of Traveni. Surrounded by thick forests and the Italian Alps, Traveni looks like something straight out of a fairy tale. The dark secrets that linger there, however, are anything but. And, once a horribly mutilated body is found in the forest these secrets that have long since been attempted to be forgotten begin to bubble to the surface.

As you can see, the cover of this book says “A Teresa Battaglia Novel”. Who is Teresa Battaglia you might ask? An aging superintendent in the Italian police force with an extensive background in criminal profiling. Crotchety, sarcastic, and sensitive when she wants to be, Teresa leads the male dominated team and is, for the most part, highly respected. She is now in charge of leading this new case and time is of the essence because she knows this killer will strike again soon.

And strike, he did. Again and again with each act seemingly more brutal than the next. In a town where everyone knows everyone, surely someone knows something. However, with a “holier than thou” herd mentality of the villagers, who would want to admit such a damning secret? It is only when the gruesome past of Traveni is revealed that the killer’s identity becomes apparent and we learn that not everyone/everything is how it seems.

Ilaria Tuti’s Flowers Over The Inferno was easily one of the best books I’ve read in a while because it was so unlike anything I’ve read before. The Italian style of writing is vastly different and it felt like every description in the book was milked to the point that I could picture it perfectly in my head. The details and imagery that Tuti conjures makes the situation all the more desperate to the point that you feel like you are on the hunt with Teresa.

Despite disturbing subject matter, this book resonated with me deeply. It put into perspective all of the ways that people, even the villain, can be victims and I could feel the deep empathy that Teresa felt for all of those she was trying to help. Every attack felt like a blow to the gut but the deep seeded trauma that the killer suffered felt just the same.

If you are looking for a gripping page turner, then Flowers Over The Inferno is right for you and I reward it the prestigious ten out of ten stars. The characters were all so unique and the story line was like nothing I have ever read before and even delved into the supernatural at times. All I know is, you won’t be able to put it down if you can stomach it and I am hoping for another Teresa Battaglia novel ASAP!

What are you currently reading? Do you have a favorite literary character? I want to hear from all of you, so leave me a comment and let’s chat! Much love. -Sarah