Hello everyone and welcome to a brand new edition of Lil Red’s Book Club! After reading and reviewing an endless amount of thrillers, Hope Never Dies by Andrew Shaffer was a definite change of pace. It was also a most welcomed one because it was sheer perfection. Hope Never Dies is a mystery book starring none other than Barack Obama and Joe Biden. It was recently reviewed on one of Johnny’s favorite podcasts, Behind The Bastards, and after hearing about its hilarity, he had to buy it for me. What a guy!

Without giving any spoilers away, let’s discuss this ridiculous book further: 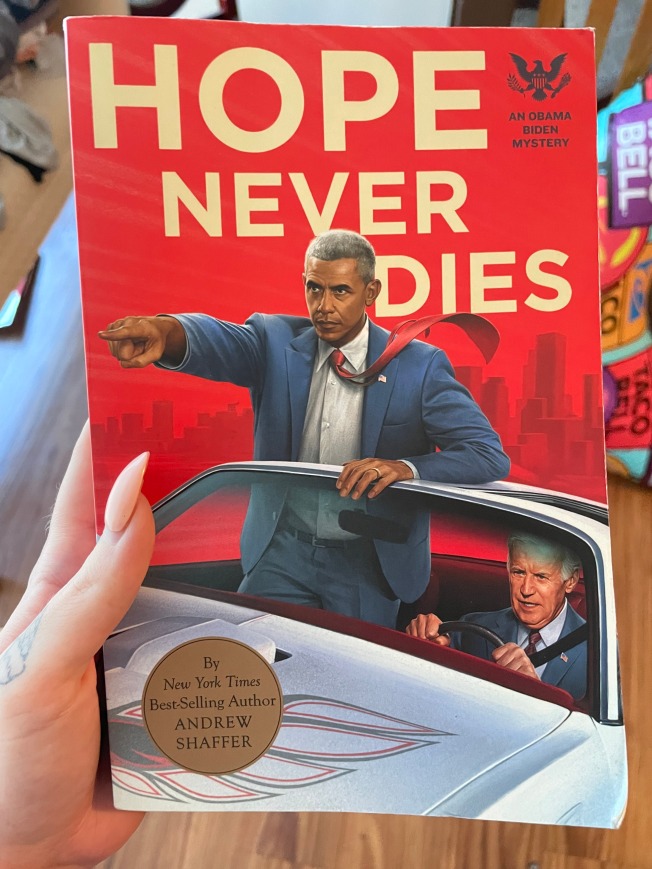 Delaware’s favorite son, Joe Biden, is simply existing after eight years of being vice president of the United States. He’s aging, growing antsy with “nothing” to do, and most importantly – desperately misses Barack Obama. After several years of not speaking once their run in office was over, Joe grows lonelier and even more depressed when he sees his former best friend living it up with his new celebrity pals. However, their reunion is just about to get started.

Late one night, Joe encounters none other than former president Barack Obama lurking in the woods on his property. He doesn’t come with an invitation for a party or an outing with Bradley Cooper (The bane of Joe’s existence), rather, he has some bad news to share. Joe’s favorite Amtrak conductor, Finn, has passed away under suspicious circumstances. And, oddly enough, a map to Joe’s home was found in the pocket of the deceased.

Joe is beside himself with the loss of Finn and decides to take matters into his own hands to uncover the mystery of his death. Of course, he’ll need some help. Cue: Barack Obama and his Secret Service agent, Steve. Through high speed car chases, infiltrating a biker gang, and some good old fashioned grunt work, they discover that there was a lot more to Finn’s death than what meets the eye.

Obama and Biden stumble across a huge drug smuggling ring through their investigations with deceit and death creeping around every corner. It turns out that Joe didn’t really know his good friend, Finn, after all. Who was responsible for the death of the seasoned Amtrak conductor? And will Barack and Joe live to tell the tale? Read Hope Never Dies to find out!

Pretty crazy, right? Lol, guys, I seriously cannot with this book and I also cannot recommend it enough. I can’t remember the last time I read a humorous book and I was in stitches with every turn of the page of Hope Never Dies. Andrew Shaffer is a national treasure and he must be protected at all costs so he can keep cranking out Obama Biden mysteries.

Joe is the narrator in Hope Never Dies and he plays the part of the scorned lover. His jealousy over Barack’s new friends and yearning for what they once shared is palpable throughout the book. From throwing darts at a picture of Bradley Cooper to dreaming of Barack in a white toga riding a unicorn, there’s no denying it: He freaking loves Barack Obama, despite falling out of touch.

As always, Barack is cool as a cucumber and Joe is full of stumbling wise cracks. A point is also made to make some digs at other politicians, which is a hoot. Through looking death in the eyes and a whirlwind experience shared, Joe and Barack end their adventure as “brothers” once more. Which is great because the sequel, Hope Rides Again, will surely begin with them as besties. And, yes, Johnny got me Hope Rides Again too!

In all seriousness, I am awarding Hope Never Dies with the coveted ten out of ten stars. If you love the Obama Biden era as much as me and are looking for a laugh, then it is a must read. This book is absolutely insane and I am one hundred million percent there for it.