Heyyy everyone and happy Thursday! I had a really fabulous night last night with my sister Kristen and her satanic dog Winston at Bark At The Park. Akron, Ohio’s minor league baseball team the Rubber Ducks play at Canal Park in downtown Akron and two times during the summer, you’re allowed to bring your pup to the game with you. Last night was obviously one of those nights so we got ourselves ready, packed up the devil dog, and was on our merry way! Now you guys may be thinking “Winston looks so cute, there’s no way that he’s as bad as Sarah says he is”. BUT on contrare – he’s literally the worst dog ever! Yes, he’s cute but he’s the biggest yippy yappy brat in the entire world! He loves to bite, bark, growl, and just be flat out annoying. The only person who he likes in my family is Kristen so the rest of us our left to suffer at the paws of a twelve pound dog. SHAMEFUL! Anyways, we got to Canal Park with Winston in tow, purchased our tickets, and found our seats in the “dog friendly” section of the park. Throughout the walkway there were huge kiddie pools filled with water and loving owners walking their tiny, small, medium, and flat out huge four legged (and sometimes three legged!) friends. Winston had a blast getting his hump on and smelling a bunch of butts and Kristen and I had a great time too! We weren’t paying attention to the game at all, so I couldn’t tell you anything about that but we had an awesome time enjoying each others company, petting dogs, looking at dogs, being a dog, and taking a million batrillion selfies! Take a look: 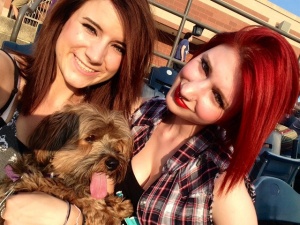 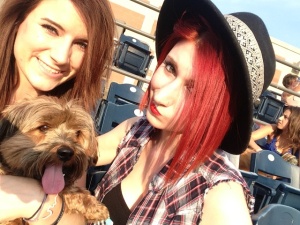 ^^^ I LOVE US!!! Our evening at Bark At The Park was seriously so much fun – much more than I thought it would be because I wasn’t too keen on going originally but Kristen talked me into it and I’m so glad that she did! Once we got home from the game, the good times just kept on rolling because one of my favorite guys took me out for a night of drinking and good old fashion tom foolery. White girl wastedness definitely happened and lots of wonderful moments were shared between my handsome devil and I! So yeah, it was a pretty swell night – and after my shit show of a birthday I think I deserved it! All of these outings with my friends has helped take away the birthday blues and I’m feeling much better about the whole situation – especially when drinking heavily is involved! 😉 The big 2-1 is finally here… It started off rocky but it’s been vastly improving as the week goes on which you better believe I’m beyond happy for!!

I hope all of you are having a fabulous day so far! Does any of the sports arenas you live by have an event similar to Bark At The Park? And also, does anyone have any recommendations on how to ease the god awful itch of mosquito bites? I got bit up last night and I basically wanna tear my skin off right now – that’s how bad they itch! I wanna hear from all of you, so leave me a comment and let’s chat! Much love. -Sarah