Hellooo everyone and welcome to a very special article on lifewithlilred about an extremely talented artist that I had the pleasure of getting to know, Kent, Ohio blues musician, John Patrick Halling. I was lucky enough to sit down for a chat with John Patrick about his most recent tour, his performance style, and some of the corniest jokes you’ll ever hear in your life.

Those who frequent my page will know that I have literally no talent for music. I can’t sing, I can’t play any instruments other than three songs on the guitar, and I also have cried during every concert I’ve ever attended – but that’s neither here nor there. What I’m getting at is that I LOVE talking with musicians because they are skilled at something that I wish I could do. John Patrick was no exception. He was humble and genuine with the quick wit of a seasoned performer. Take a look at part of the interview conducted by yours truly and listen along to the songs we discuss on his website.

Our chat began with some rapid fire questions about John’s most recent two month musical excursion, his Boy in the Water US tour, so let’s get to it: 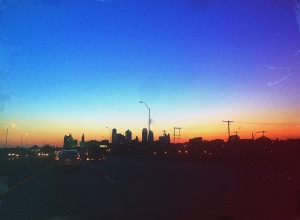 ^^^ Pictured above: John striking a pose in the Grand Tetons National Park in Wyoming as well as a scenic pic he snapped while driving into Kansas City.

After having a spitfire session about the Boy in the Water tour, John and I moved on to discussing his music, his style, and his future plans for his career. Please don’t think that I use the word spitfire lightly, either. All of the questions above were asked and answered in a little over five minutes. Everyone tells me that I’m a very fast talker and I met my match with John Patrick! Turn his music up and let’s move on:

^^^ Pictured above: Sporting a signature hat in Asheville, North Carolina and a view of the picturesque Arches National Park in Utah. (Can we just talk about how the sky in both pictures looks like something out of a story book? So amazing.)

Are you a fan of John Patrick Halling? You can reach out to him by:

You can also listen to the album Boy in the Water on all of the following mediums:

I really can’t begin to tell you guys how much I enjoyed my time with the fantastic John Patrick Halling. The pleasure was truly all mine and I can’t wait to see him perform in the near future! Do you have any questions for John Patrick? What is your favorite song off of his album Boy in the Water? I wanna hear from all of you, so leave me a comment and let’s chat! Much love. -Sarah