Hello! This past weekend, I went to Playhouse Square with my dad, brother, and Val Gal to see a matinee showing of Frozen at the KeyBank State Theatre. I have never seen the movie the whole way through but it’s my niece’s favorite and Playhouse Square always puts on amazing shows so I was excited! There were things about Frozen that blew me away and other parts that were… not so much.

Regardless, it was SO special to accompany Val to her first ever live theater performance, which she loved. In fact, she asked if we could go again tomorrow! She was also dressed up in her Elsa costume and it was adorable seeing all of the little Anna and Elsas walking around. 🙂 Now, let’s get to this review starting with the good: 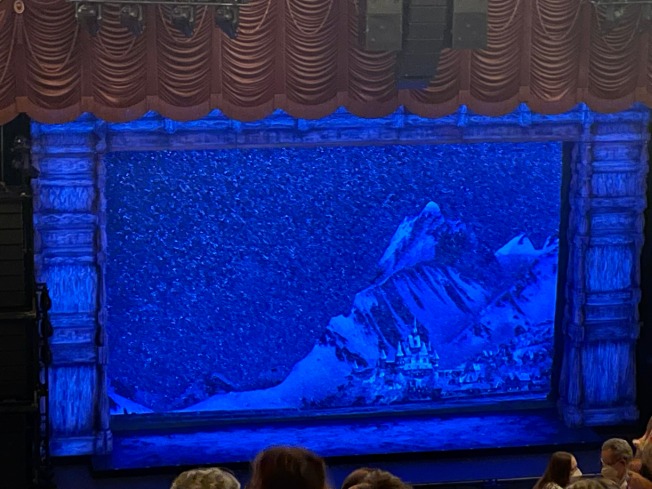 Although a majority of the acting and singing in Frozen was great, the best thing about the show was, easily, all of the wonderful special effects. The lighting, set design, and flying pieces was true theater magic. This production used techniques that I had never seen before and, honestly, didn’t even think were possible. I had no idea how they were going to create the eternal winter landscape that Elsa created but it really did look like the entire stage was encompassed in snow and ice.

A huge credit should be given to the production team because this show would not have been nearly as good without everything that was accomplished by them. The set was so elaborate and visually beautiful and the lighting and soundscape enhanced everything tenfold. Now that I think of it, the only things that “wowed” me were all production related.

While some of the actors kind of missed the mark for me, there were a few performances that really stood out. F. Michael Haynie who played Olaf was spectacular and a formidable puppeteer too. I didn’t know how they were going to create the talking snowman and a to scale version puppet was cleverly used. It worked perfectly and Haynie played the part so well.

Evan Strand played Sven, Kristoff’s reindeer, and this was also another head scratcher for me. It’s not like they could have used a real reindeer for the show and most animal portrayals by actors can be kind of lame. However, the costume that was used for Sven was one of the best that I have ever seen and I almost thought that it was an actual reindeer at first! His physicality was spot on and I was very impressed – I think he outshined Kristoff completely.

Caroline Bowman as Elsa was pretty good, although I felt like she was a bit boring. Her time on stage was kind of lackluster and what shined during “Let It Go” wasn’t her but the incredible production behind it. Lauren Nicole Chapman as Anna also left A LOT to be desired. She was SO. Freaking. Annoying. Her voice was also very shrill. Granted, I haven’t seen bits and pieces of the movie in a while but I definitely don’t remember Anna being like that – maybe I’m wrong!

Because there aren’t too many original songs in the movie Frozen, a majority of the numbers had to be created for the stage. I liked a fair amount of them and enjoyed “Let It Go”, “In Summer”, “Fixer Upper”, and “Monster” the most. I will say that there were times when it was difficult to hear/understand the actors so that took away from some numbers that I could have potentially enjoyed.

Some of the songs really dragged the show on for longer than I thought was necessary, though. For example “Hygge” sung by Oaken and company was kind of a hot mess. I get that productions more geared towards children have to throw some things in for the adults BUT it felt inappropriate for the kids in the audience. It was, hands down, the cringiest part of the performance.

There were times when Frozen was hit or miss and that’s fine because the biggest success of the show was how much fun Val had. I am thrilled to have been able to share in my love of live theater with her and can’t wait to do something like this again!

What is your favorite musical? Have you seen any good shows lately? I want to hear from all of you, so leave me a comment and let’s chat! Much love. -Sarah