Hello everyone and welcome to a brand new edition of Lil Red’s Book Club! Today, we are going to be discussing a thriller called The Family Plot by Megan Collins – without giving any spoilers away, of course! The last book I read was by Collins and I was so impressed by her that I just had to read more of her work. I am so glad I did because The Family Plot is, easily, one of my new favorites. It was EXCELLENT.

Before we begin the review, I will be placing a trigger warning on The Family Plot for disturbing content dealing with murder. Now, let’s get to it: 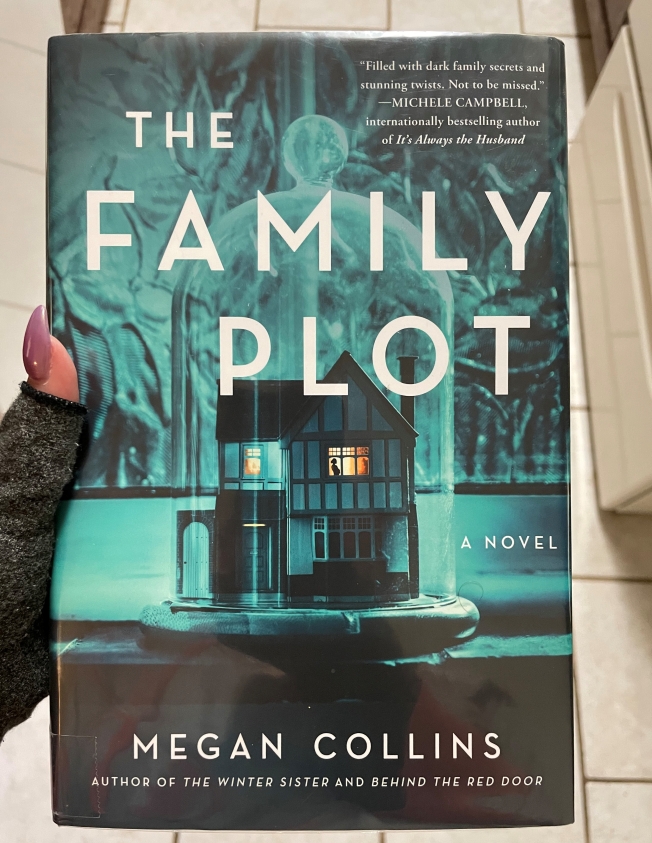 Saying that Dahlia Lighthouse didn’t have a normal childhood is a severe understatement. She grew up in seclusion with her parents, twin brother Andy, and older siblings Charlie and Tate in a home that the locals refer to as “Murder Mansion”. The children were all home schooled but their curriculum was far from learning math and science. Rather, it revolved around their mom teaching all of them about murder and serial killings. And, yes, all of their namesakes are after murder victims.

Mother Lighthouse lost her parents in a grisly murder and the island that Murder Mansion is on has their own serial killer, the Blackburn Killer, who has never been caught. To protect her children from the evils of the outside world, she taught all of them about the worst possible things that could happen. It was her skewed idea of keeping them safe, but did it really?

As soon as Tate and Charlie became of age, they left the island without looking back. Dahlia had similar plans with her twin brother but on their sixteenth birthday, Andy disappeared and was never seen again. The loss of Andy is a gaping wound for Dahlia and she hasn’t seen or talked to her family since she moved to the mainland.

Unfortunately, Dahlia’s plans to never return to Murder Mansion were cut short when her father died unexpectedly. It’s bad enough that she has to be thrust back into her childhood home, which is a shrine to all things murder but that will not be the worst of it. In the family plot on their property, a body in the grave that has been dug for her father is discovered and puts her family at the center of an investigation.

Everyone in Dahlia’s family is a suspect for the murder of this unknown person on their property. The police even think that one of the Lighthouses might be the Blackburn Killer and Dahlia does too. As their investigation begins, Dahlia starts one of her own and the secrets that begin to spring forth confirms her feelings that she never knew her own family at all. Who is the Blackburn Killer? Read The Family Plot to find out!

As soon as I started reading The Family Plot, I was one hundred million percent in and I was genuinely upset when it was over. As you all know, Johnny and I are huge true crime buffs ourselves, so a family who lives their lives ensconced in murder was an interesting prospect. From Dahlia’s childhood to a broken family and a serial killer still at large, everything about The Family Plot kept me turning the pages until there were none left.

Every story line in this book blended together effortlessly and the grand reveals left me SHOOK. I was so engrossed in The Family Plot that I didn’t even try to figure things out for myself. Rather, I let it ride. While there were some things I pieced together on my own, I didn’t see most of the twists coming at all and there were so many instances when my jaw dropped to the floor.

The fascinating plot was held together by a formidable team of characters and I enjoyed reading about all of them. I loved brave and determined Dahlia, her true crime junkie friend, and the Lighthouse family groundskeeper named Fritz. However, it was older brother Charlie that stole the show. Charlie hides his trauma through alcohol, sarcasm, and living his life as a performance. He was absolutely hilarious and he had countless one liners that made me laugh out loud.

If you are looking for a fast paced read, a highly unique plot, and a good old fashioned whodoneit, then I can’t recommend The Family Plot enough. I am going to rate it with the coveted ten out of ten stars and I would happily read it again. Megan Collins knocked it out of the park yet again and I am itching to read more by her!

PS: Be sure to tune in tomorrow for blooper shots from my Spring Skirt Savvy OOTD! 😀