Yo yo yo. I’m sure when you read the title of the post all of you were like “what?” because I would be nowhere without my Better Than Sex mascara by Too Faced. And, that’s still true. But, oh my god, they must have changed the formula or something because the mascara is SO sticky now and I really just can’t deal. This would all be fine and dandy if it wasn’t for the fact that I wear contacts because it has been causing me a lot of grief. Read on to find out more! 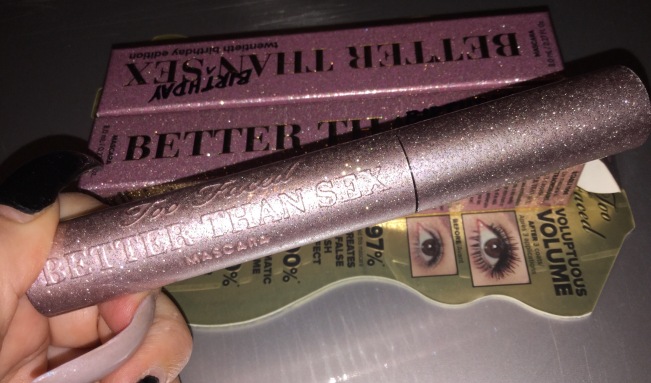 The first thing that I do once I’m out of the shower and have wiped off my face with my micellar water is put my contacts in. This has been my routine for years and, then, I apply my skin care products and makeup accordingly. But, now the order of operations has been tragically skewed because the fact that my mascara now takes at least a half hour to fully dry has been destroying my contacts left and right.

Within an hour or so of having my mascara on and contacts in, they would be so dry from the Better Than Sex getting on the lenses that I literally couldn’t see anything and would have to take them out. It was getting to the point where I had to wear my glasses with the wrong prescription to go about my day, making my vision nowhere near as sharp as it should be. It was just getting ridiculous.

After going through a box of contacts that should have lasted me three months in a little over one, I said that enough was enough and began putting my contacts in after my mascara had time to dry. Annoying? Totally. But, it worked, and I am no longer changing my one a day contacts twice daily.

On the BTS reviews on Sephora’s website, I saw many people complain about the same issue that I was having so I just had to write a post about switching up my morning routine to accommodate the stickiest mascara ever. And, also to say to Too Faced to get the old formula of Better Than Sex back ASAFP, because this new one is not doing anyone any favors. SMH!

Which mascara do you use? What do you do about sticky mascaras? I want to hear from all of you, so leave me a comment and let’s chat! Much love. -Sarah